Prof. Pedram Baldari, Assistant Professor in Studio Art at the College of Visual Arts and Design (CVAD), UNT, is our newest iARTA member.

Pedram received his first degree in Architecture, from University of Tehran, in Tehran, Iran, where he also took classes in the School of Fine Arts, which nurtured his early interest in conceptual art. Through study of art theory and history, he developed a studio practice by exploring art as a form to express and address social issues. This is characterized by one of his earlier works, Irrexxxsible, which utilizes x-ray machines as a camera to inspect what is underneath Western branded fashion products. The photographs explore the contradiction between the Iranian state’s ban on the products (referred to as “Western cultural invasion”), and Iranian teenagers’ fascination with them.

Prof. Baldari then moved to the United States and received his MFA in Studio Art from Texas Tech University (2015). His more recent works seek to explore intersectionality and marginalized narratives, to connect his experience as a Kurdish-Iranian minority in Iran, with underrepresented groups, in particular, Indigenous communities, in America. His practice also reflects on issues related to immigration and marginalization. His work, Immigration Laws and How to Use Them (2019), investigates how the U.S. Immigration Policy has historically excluded racial minorities. 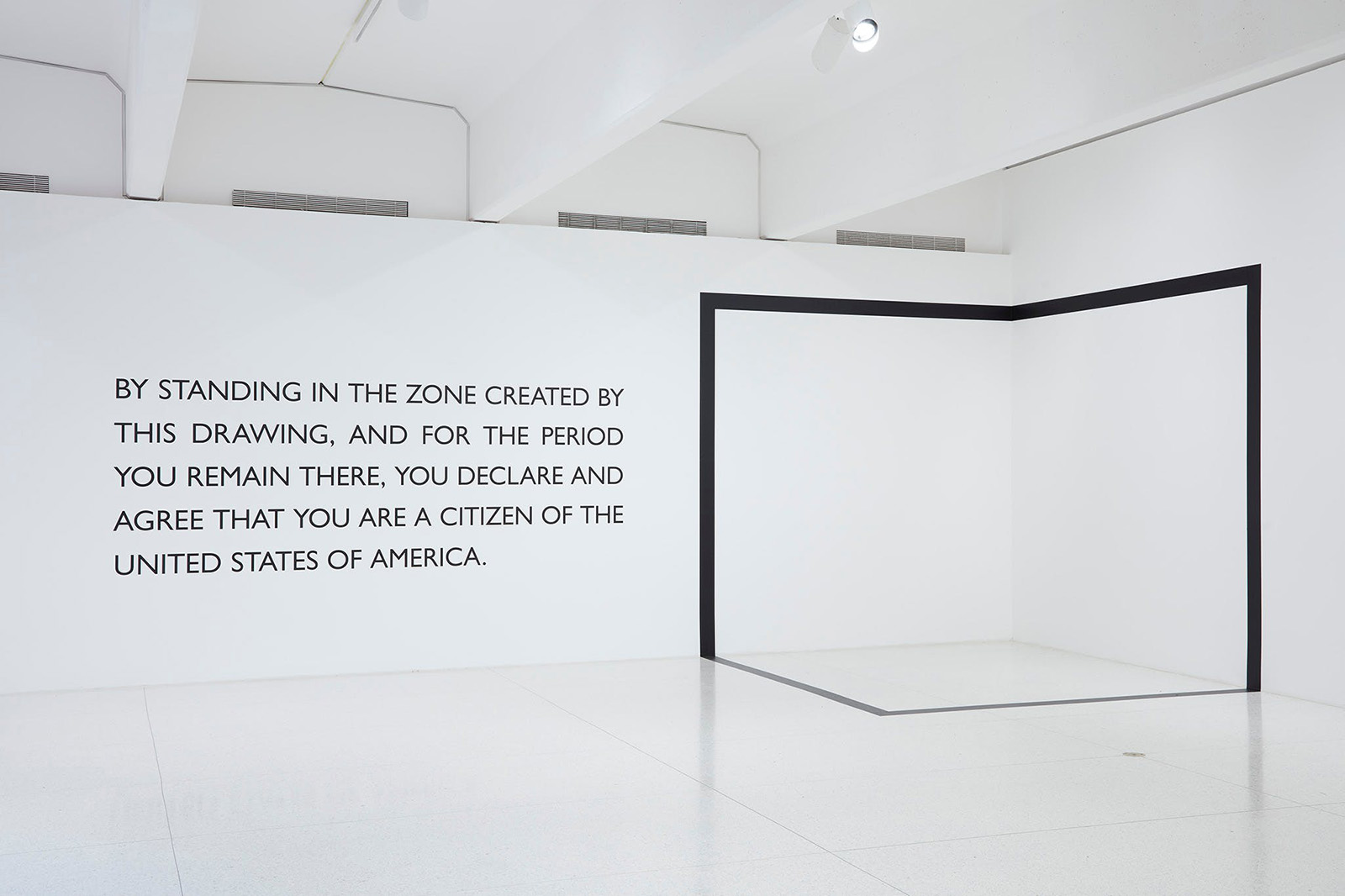 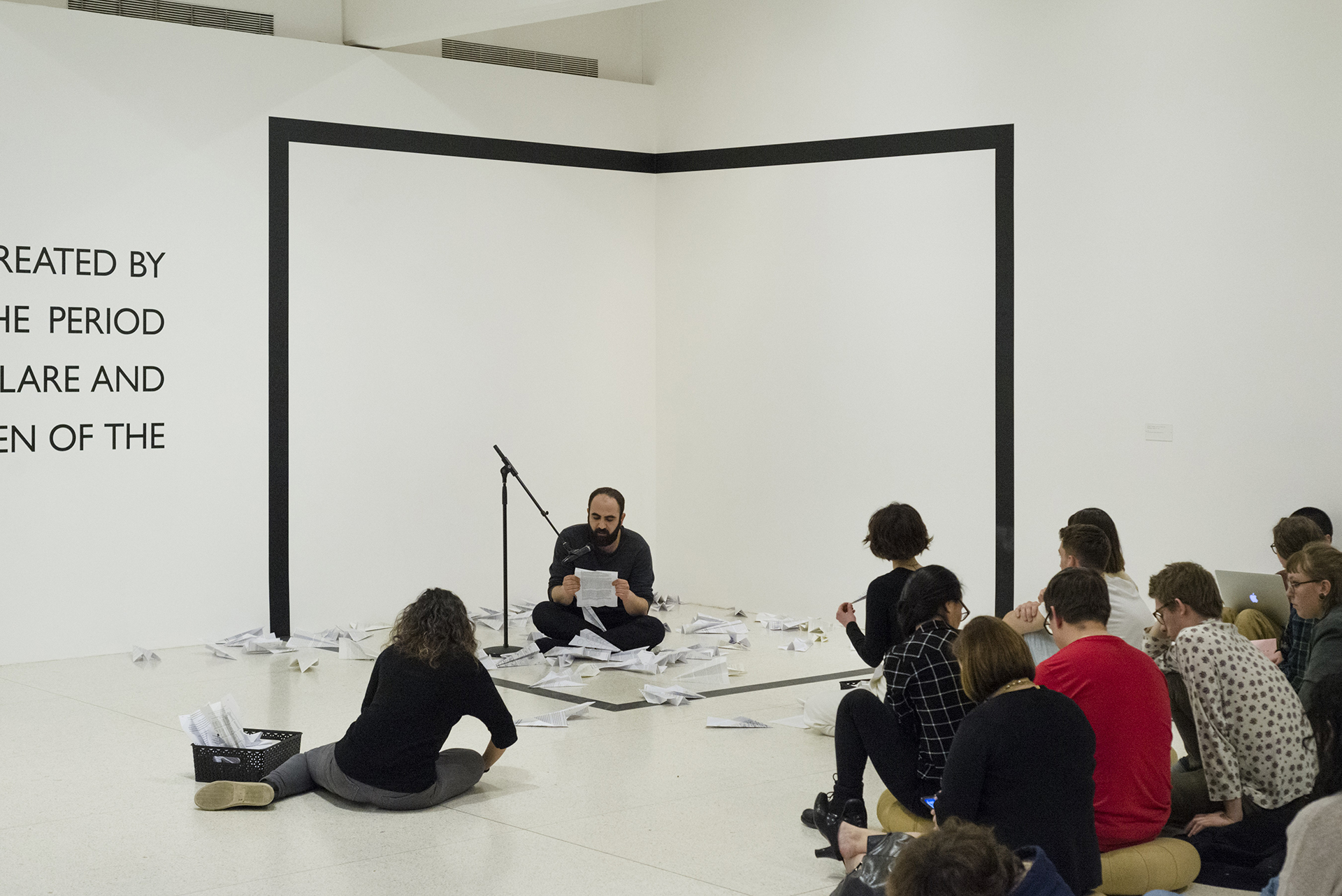 (Photos above: Immigration Laws and How to Use Them, 2019, Walker Art Museum)

During his previous teaching post at the University of Minnesota, Prof. Baldari developed an ongoing interest in sound. Through collaboration with musicians on the work, Variations of Sounds, Traveling Between a Barrel and a Heart (2019– ), Prof. Baldari repurposed guns as wind instruments, utilizing clarinet mouthpieces attached to rifle barrels. This project generated a deeper understanding of the musical world. He recognizes two far-ends of the music world and the art world – one being classical operas and orchestras, another being highly curated and commodified art galleries – with little conversations between each other. In this process Pedram has realized there is a middle ground, where musicians and visual artists connect with interdisciplinary approaches. As he describes, “This is, for me, a new world to explore, and that’s why I became fascinated with that conversation – how my work can evolve by being exposed to musicians who live in between music performance and visual arts.”

(Video above: Variations of Sounds, Traveling Between a Barrel and a Heart (2019– ))

Most recently Prof. Baldari has begun work with another iARTA member, Dr. Marco Buongiorno Nardelli, whom he collaborated with on Requiem Between a Barrel and a Heart (2022), an installation piece that uses FM radio transmitters and transistor radios, yarn, bullets, along with fixed media created from instrumental samples and voice recordings. The radio transmitting soundscape and the data-driven musical system echo to the aesthetics of improvisation and chance elements developed by composer John Cage. The musical sound changes upon interaction with visitors. The work utilizes instruments from Variations of Sounds, Traveling Between a Barrel and a Heart, along with recorded voices that, according to the work description, “count series of numbers in correspondence to the number of victims of gun violence and war across the globe.”

Pedram Baldari is an Assistant Professor in Studio Art at University of North Texas. 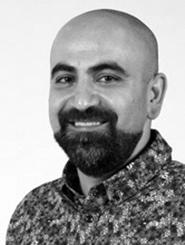 He is a Kurdish-Iranian born, sculptor, architect and interdisciplinary artist, working in installation, site specific, performance art, social practice and sculpture. Pedram is based between Minneapolis, MN and Denton, TX. He has been featured in numerous national and international solo and group art exhibitions since 2010 including Victoria and Albert museum London 2012, Documenta 13th Video Import-Export program, Video Nomad Tokyo 2015, Art Basel Basel Switzerland 2014 and shown work across the U.S in museums and galleries as recent as his work at Walker Art Museum. He has participated in international residencies and group exhibitions in Europe, Asia, the Middle East, Turkey, and the U.S. Prof. Baldari is the recipient of 2012 Magic of Persia and Delfina Foundation Award, Jerome Fellowship Commission for Franconia Sculpture Park 2017, Vermont Studio Center Award 2015–2020, StarDust Fund for his fellowship and art residency at Weisman Art Museum, he is awarded for 2021 spring/summer MacDowell Art Fellowship for two months Artists Residency at MacDowell Art Colony.

To find out more about Prof. Baldari’s works, visit https://www.pedrambaldari.com/.