Exploring emerging technologies and new media for novel interactions between the arts, engineering and sciences Diana Rojas and Zuyva Sevilla are intermedia artists who exemplify the collaborative and interdisciplinary spirit of iARTA. Both Diana, a current MFA student in New Media Art and Zuyva, an alumnus, have pulled from many different disciplines to creative innovative and sophisticated approaches to their praxis as artists. 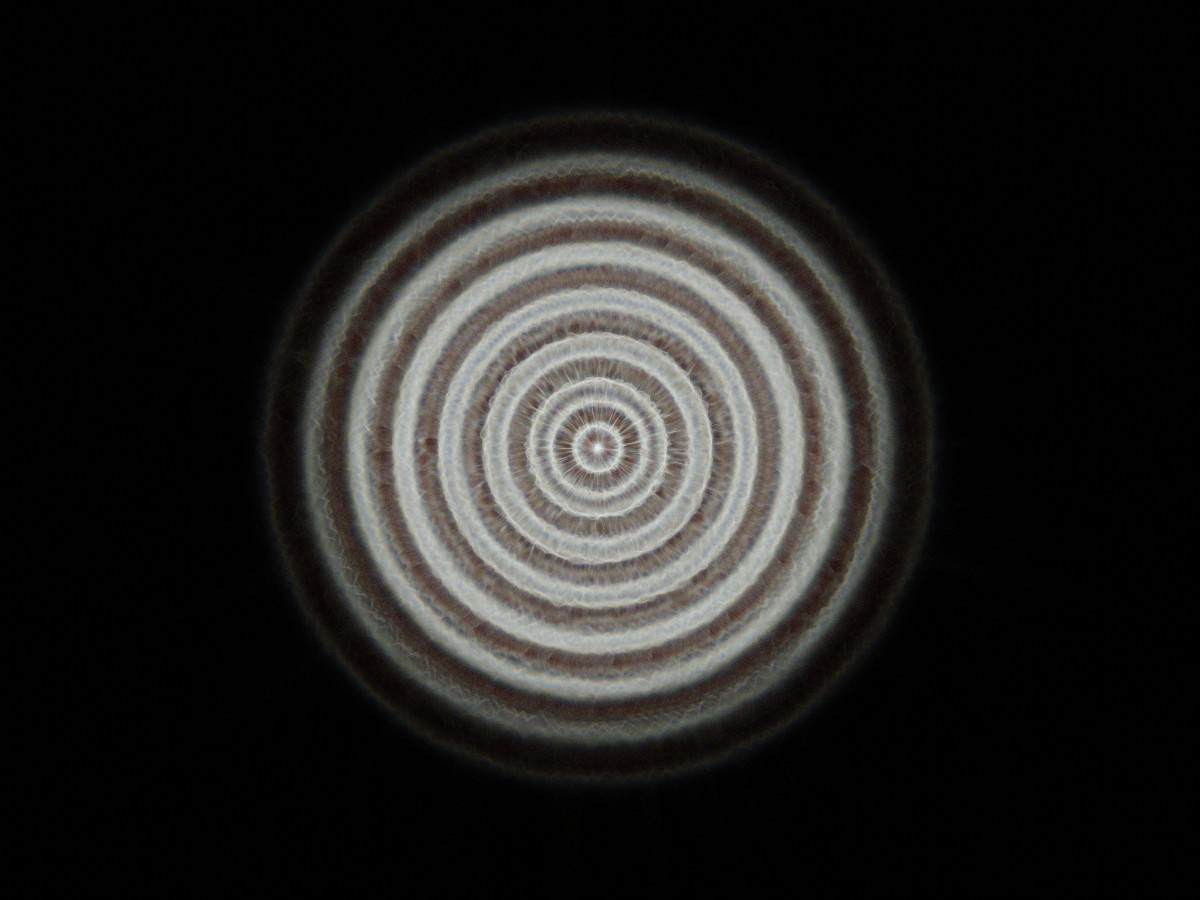 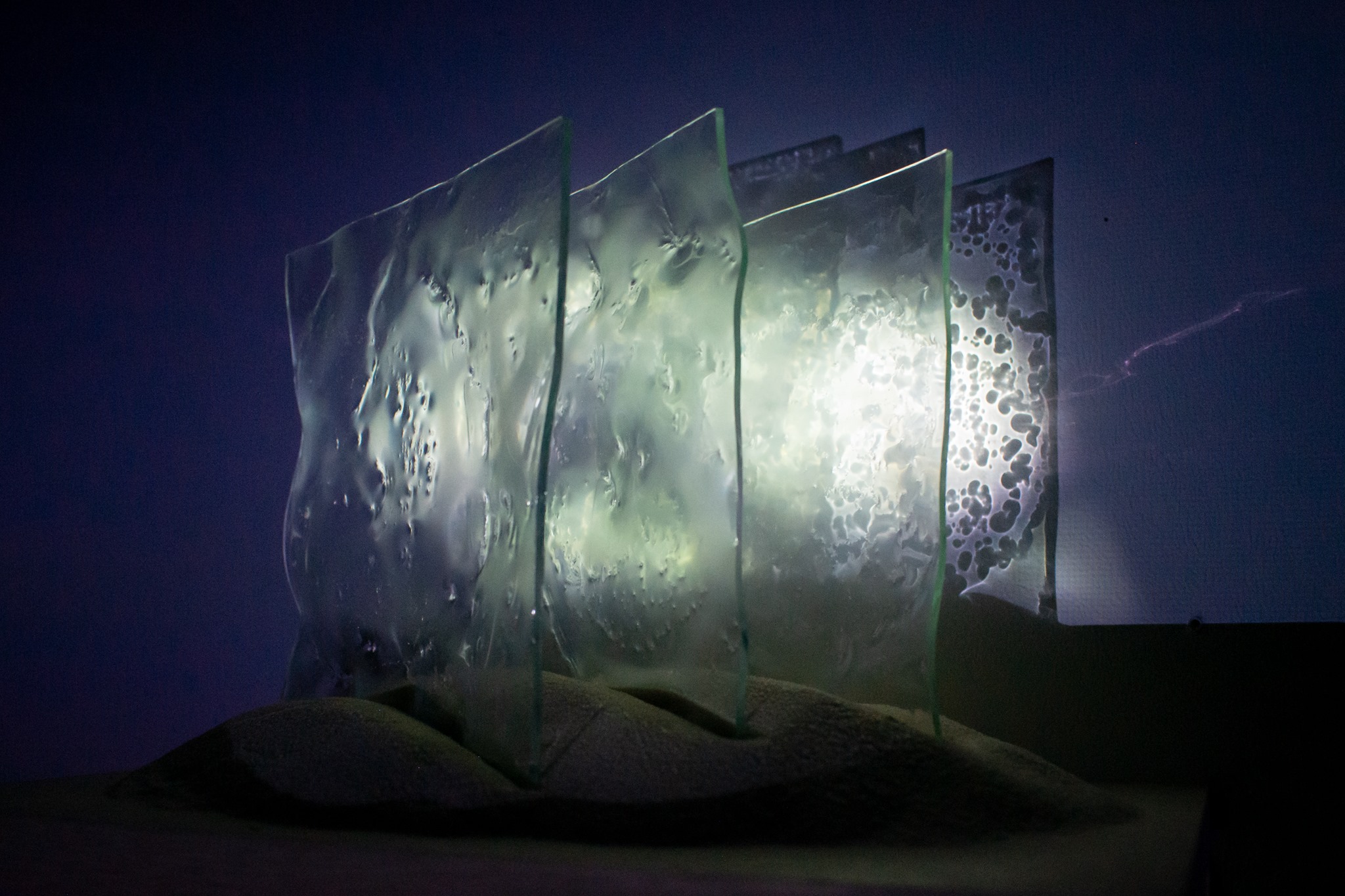 Diana’s art, which has been exhibited nationally and internationally, exists at a veritable crossroads of visual art, material science, philosophy, history, and music. This leads her to create deep and introspective pieces focused on perceptions of the liminal spaces between the sublime and the physical. The spiritual core of her work is informed by light, sound, and material science and how the interactions of these physical elements can create dramatic, sophisticated, and complex results. Some of her recent pieces explore the use of silica aerogel, an ethereal synthetic material made almost entirely of air, highlighting her keen interest in the boundaries between the physical and the otherworldly. 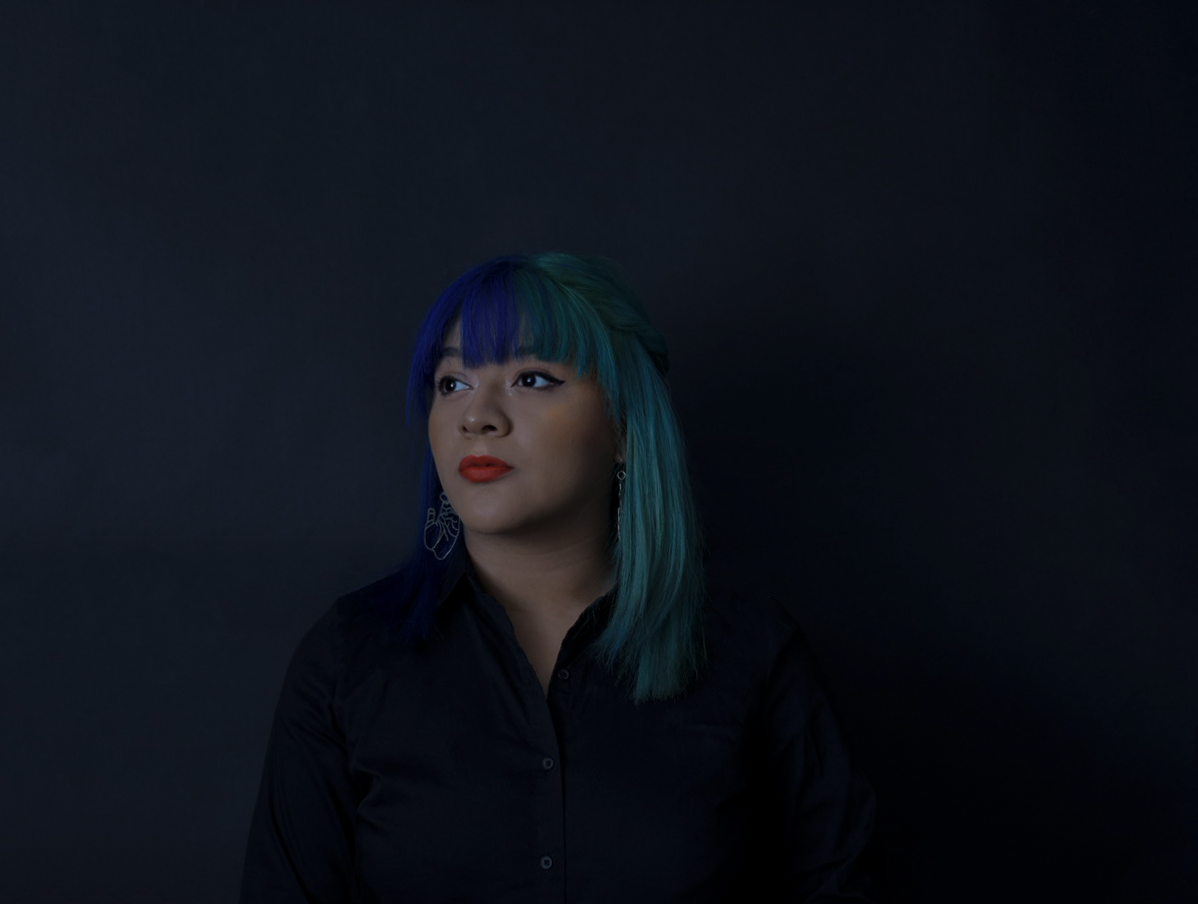 Working with material sciences has also informed Diana’s approach to her artistic praxis as a whole; beyond the obvious terminological differences between the disciplines, Diana has found inspiration in the material scientists’ approach to process and failure. Since materials often fail due to some error in the fabrication process, failure is a routine and necessary part of their working process. This often means that starting over is a natural a part of the material scientists’ workflow, making it a natural and necessary aspect of the journey to the end goal of producing a new object or material. This has inspired Diana, who now sees challenges or failures in her own work to be natural parts of her artistic praxis as she explores these dynamic new directions for her art.  This exploration of silica as a material has also led to a deep and ongoing study of materials such as glass and sand, whose latent qualities make them ideal for explorations in light and sound. 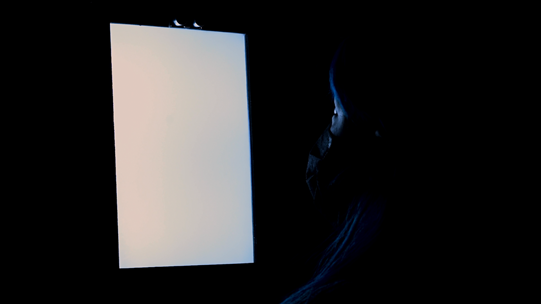 In addition to her work with material sciences, Diana has a profound interest in the use of sound and music in her art, and she has often worked directly with musicians and composers to create musical performances and installations. This use of sound comes from her burgeoning interest in psychoacoustics and the ways that music can evoke a feeling of the ethereal and metaphysical. In an artistic context, this often means evoking a specific atmosphere that is dramatic and evocative of the existential enormity of the divine.  Diana, a musician herself, has created pieces ranging from interactive visual pieces with live performers to five-screen ambisonic fixed media video works to intimate and introspective installations with ambient sounds. 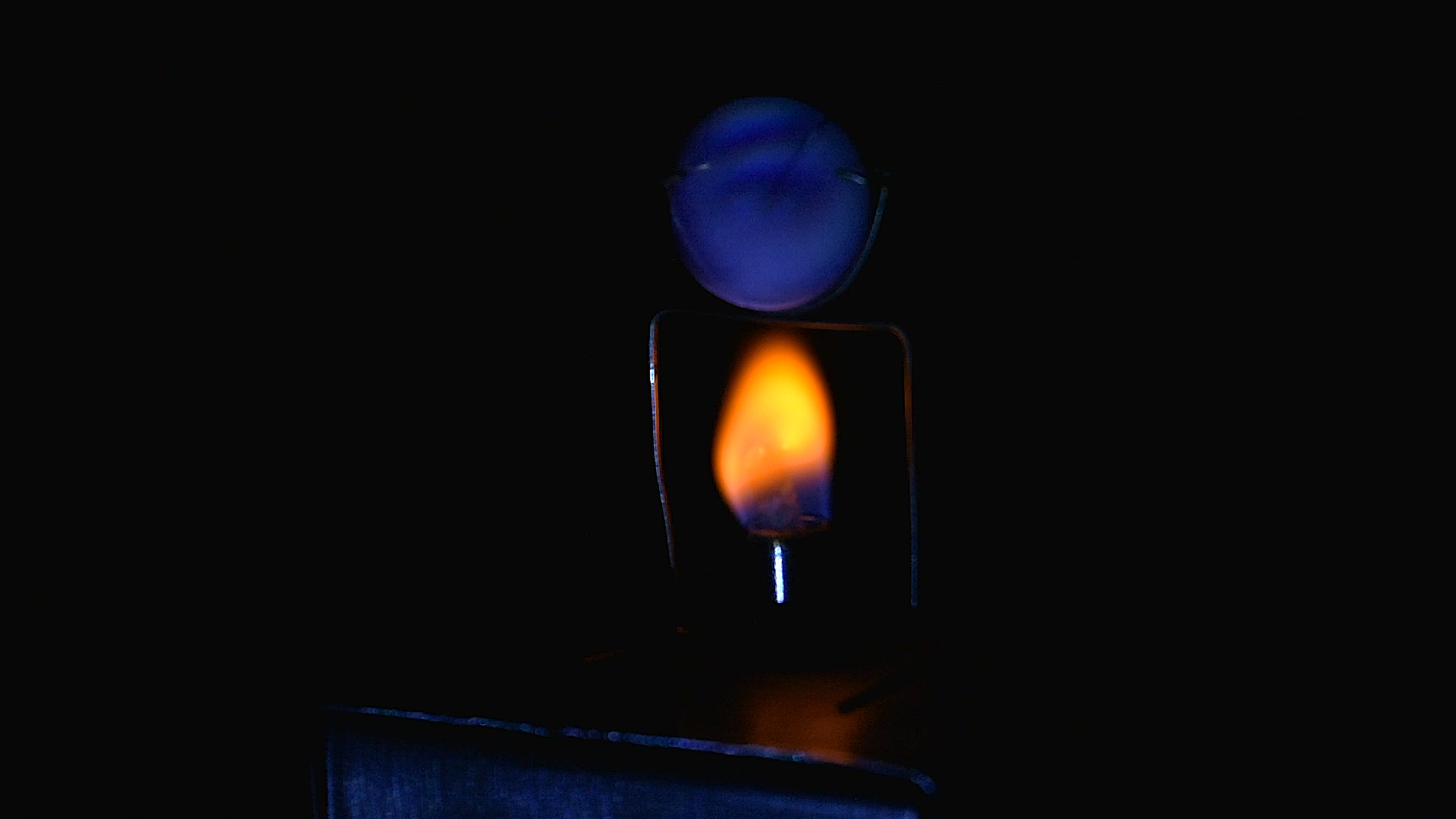 More than anything, the most exciting thing about collaborative and interdisciplinary work for Diana is the community she’s built. As she said in our recent interview,

"One thing that I really love about the interdisciplinary process is that it's not just about how different forms can be produced, but for me it's also connecting with people and building my own personal community. This, in turn, helps with building my communication skills, because there's a different way that I have to communicate with each department in each group of people. I don’t want to just commission the work, I really like to be able to go into unfamiliar spaces and learn about somebody else's field, life and process. Learning from and being inspired by their passions influence my work in a way that is very rewarding and gratifying.”

Like Diana, Zuyva finds fulfillment in building bridges between creative people in multiple disciplines “It’s been wonderful to work with people who dedicate their lives to skills that I don’t have so that we can work symbiotically toward a common project; some of the people I work with can do things beyond my comprehension, and I hope that I’m also bringing something meaningful to the table.” 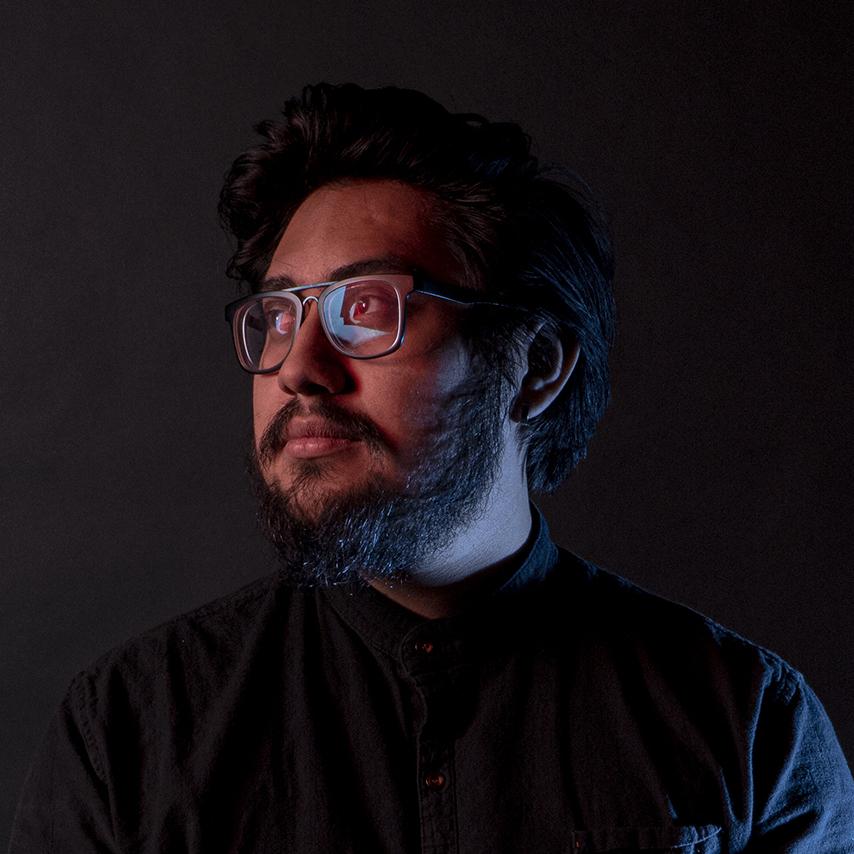 Zuyva’s interests have taken him deep into collaboration with scientists, and his passion for science has led him to work with Ideum, an innovative company that uses cutting edge technology to design public installations and educational displays to create compelling and informative interactive experiences. As an A/V Design technician, Zuyva’s creative skills as an artist are called upon alongside his broad technical expertise to create aesthetic realizations of practical concepts in public museums and galleries across New Mexico.

By creating compelling artistic realizations of scientific concepts, Zuyva hopes to capture the attention of people in his community and help them to understand ideas that might otherwise fail to compel or inspire them. His work with Ideum has allowed him to merge his passion for science and his experience as an artist creating visually compelling works.

Zuyva’s own art reflects his interests in physics and material sciences with his series of studies on the physical properties of light through custom designed and realized resin lenses. These lenses illustrate characteristics and patterns within light waves to create deeply compelling explorations of the aesthetic implications of the natural properties of the fundamental building blocks of our universe. 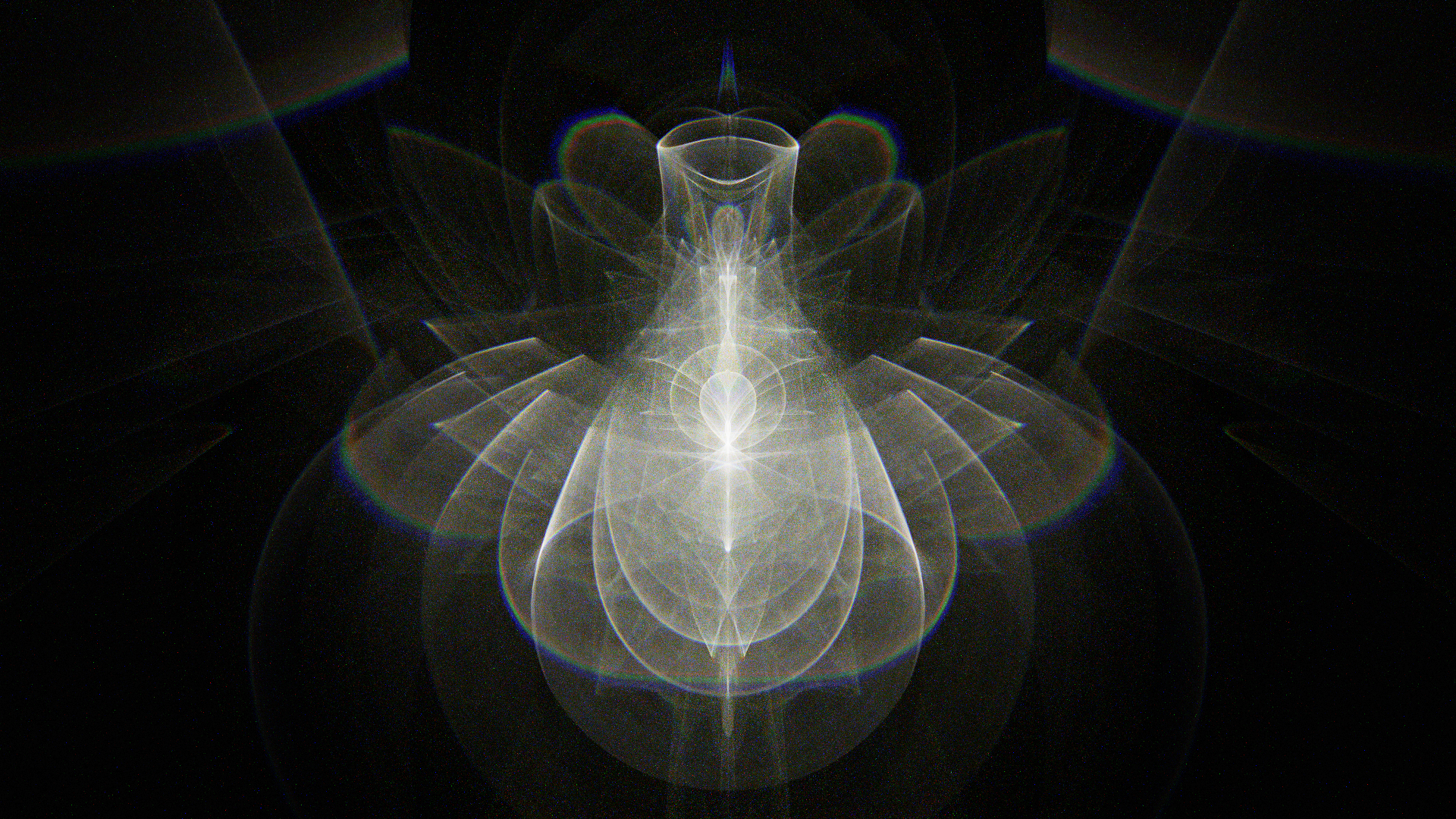 This scientifically minded approach has led Zuyva to be extremely versatile, able to work well within the constraints that specific installations often demand when working with scientific principles.

“With all of these scientific installations that I’m doing, it’s great to be able to work with all of these different people of different backgrounds and take all of their perspectives into account; taking a set idea and figuring out how to turn it into something tangible has been extremely rewarding.”

This versatility doesn’t just stop at interactions with science, however. Zuyva’s collaborators have included other visual artists, composers and musicians, filmmakers, and creative coders as a part of multiple iterations of iARTA’s Intermedia Performance Art Class, where he helped to create virtual exhibitions and augmented reality experiences as a part of the total immersive experience. In 2020, he was one of the lead designers and the video streaming systems technician for Press <G> to Fly, a virtual exhibition and performance site created in Mozilla Hubs. 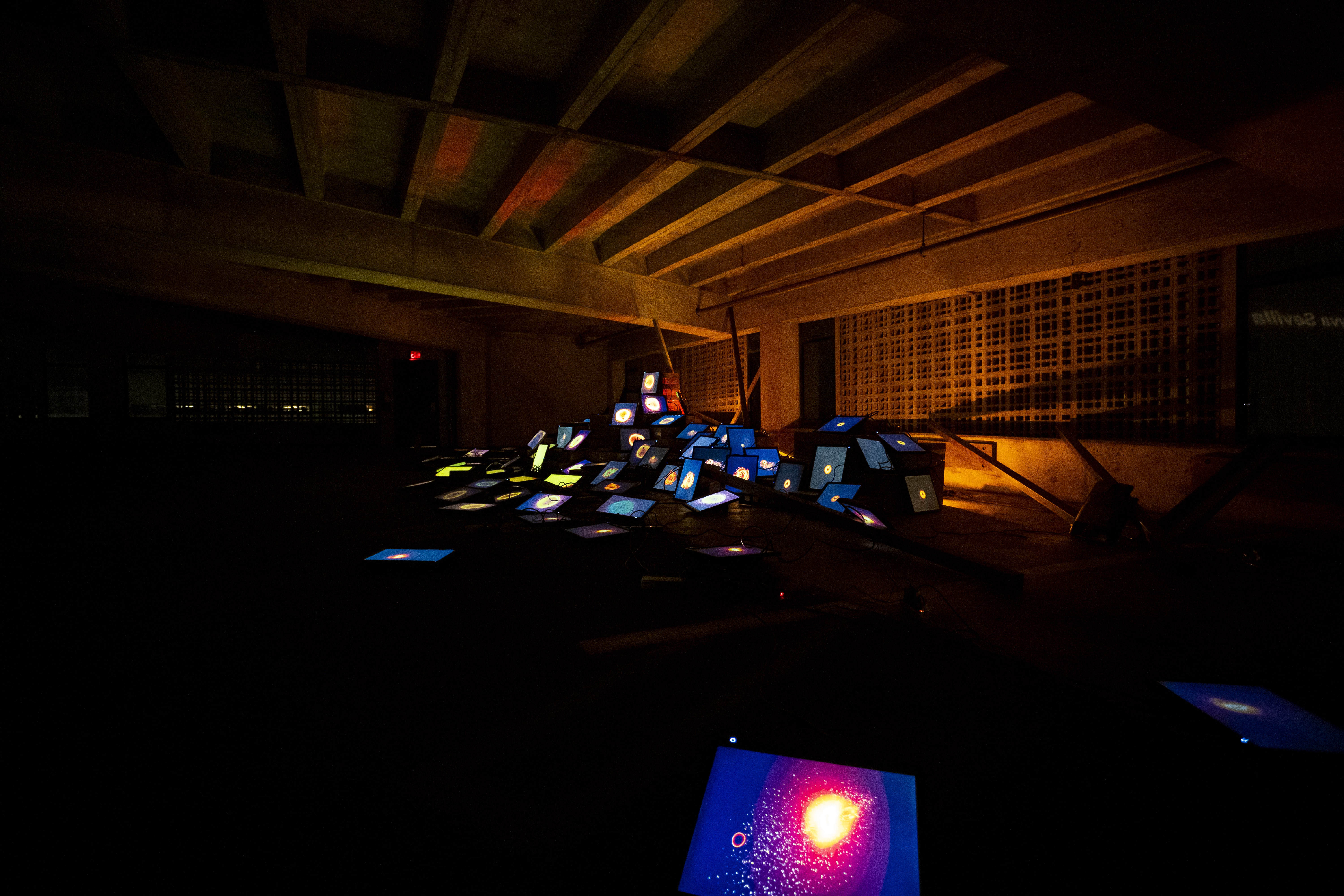 You can find more info about Diana here and Zuyva here. Joseph Klein's dance film, Chain of Circumstances, was selected for the FilmFest by RogueDancer: Dance NOIR Edition, which is showing online from November 19 through December 5.

Chain of Circumstances, a modular work for solo pianist and solo dancer, explores aspects of recombinance, modularity, and non-linear musical structures. In this regard, the work is conceived as a series of disparate, distinctive, and relatively static musical states that provides an ever-changing sonic canvas, which the pianist(s) may alter at will. In performances that include solo dancer and/or electronics, the result is a kind of dynamic and unpredictable “feedback loop” between the various elements; this fixed video realization of the work was created specifically for the type of remote concert experience that has become common (and necessary) during the current pandemic. Chain of Circumstances was supported by a grant from Texas Woman’s University, and composed in February–March 2020 for pianist Richard Shuster and dancer/choreographer Jordan Fuchs.

In the midst of the pandemic, Sonic Murals highlighted the strength and creativity of the greater Denton Arts community. A joint venture between iARTA and CEMI, Sonic Murals solicited music, sound art, new media, performance, and digital art for remote presentation, streamed simultaneously on Twitch and YouTube. The festival’s five concerts included 53 pieces of art, music, and media by Denton artists and musicians as well as UNT students, faculty, and alumni. The streams were simultaneously presented at three sites, in the UNT College of Music Courtyard, as an installation projected onto the side of the College of Music just outside the Merrill Ellis Intermedia Theatre, and in the College of Visual Art and Design.

While social distancing and measures designed to prevent the spread of COVID-19 have disrupted the traditional paradigm for the presentation of concerts at the College of Music, endeavors like Sonic Murals strive to maintain and strengthen the connection between artists in the community, giving them a platform to share and promote their work. Streaming platforms like Twitch and YouTube also allow users to comment on the pieces as they are being presented, allowing for participants to connect to one another as their art unfolds. This allows for a new kind of connection between creators in the community, giving them a sense of participation in the presentation and facilitating the free exchange of ideas.

Though we have been faced with challenges in 2020, organizations such as iARTA and CEMI continue to strive to present new avenues for students, faculty, and community members to present their work and engage in the thriving community of artists and creative thinkers in Denton. Dr. Marco Buongiorno Nardelli, Distinguished Research Professor of Physics and Composition at UNT, has a dynamic approach to music that is driven by his understanding of science and data and the ways that numbers can both describe the ways that we perceive music and give root to new practices for the creation of new music. He seeks data from sources such as cosmic rays to discover novel materials that he can shape into meaningful musical experiences. Much as a sculptor would fashion complex forms from marble, clay, or metal, Dr. Buongiorno Nardelli sculpts music from numbers.

This entire praxis, “data as music, music as data” as he describes it, reflects his stature as a physicist and researcher studying theoretical and computational materials physics. In fact, Dr. Buongiorno Nardelli sees his work in physics and music as two natural extensions of his practices as a creative thinker. “At the core, I am doing the same thing; the tools that I use to achieve the end-goals are different, of course, but the conceptual framework is very similar. These two things talk to each other at a very deep level.”

His interest in the deep connections between data and music have led to the creation of musicntwrk, “a python library for the pitch class set and rhythmic sequences classification and manipulation, the generation of networks in generalized music and sound spaces, deep learning algorithms for timbre recognition, and the sonification of arbitrary data.” These networks can represent and describe different musical spaces enabling the network to represent the distributions of musical languages as disparate as 18th century Classical Harmony and 12-tone music of the 20th and 21st century as emerging property of the network itself. These networks seek to encapsulate the ways that we perceive music and provide context for the complex structures that define our understanding of music.

Among Dr. Buongiorno Nardelli most recent compositions is The Messengers; a CosmOpera for voices and fixed media (single channel video, two-channel audio), Plexiglas and cosmic rays. This miniature opera is a collaboration with librettist Ken Eklund that blends live performers, electronic sounds, video, and cosmic ray detection to creative a narrative installation that explores the notion of voicemails traveling through space and time from the future to communicate with the present. The installation is interactive, using sensors to allow the audience to shape the visual and sonic world of the piece as they experience it.

Dr. Marco Buongiorno Nardelli is a University Distinguished Research Professor at the University of North Texas, a composer, flutist, a computational materials physicist, and a member of CEMI, The Center for Experimental Music and Intermedia, and of iARTA, the Initiative for Advanced Research in Technology and the Arts. He is a Fellow of the American Physical Society and of the Institute of Physics, and a Parma Recordings artist.