The UNT-based research cluster Initiative for Advanced Research in Technology and the Arts (iARTA) has launched an online journal in partnership with the UNT Libraries. Moebius explores international art trends and issues at the intersection of theory and practice and is one of thecritical scholarship activities that supports iARTA’s focus on hybrid research, technologies, and new media applications.

iARTA is pleased to announce the inclusion of two new faculty members in our evolving research cluster. Paula Gaetano-Adi (College of Visual Art and Design) brings an expertise in art-robotics, performance and the aesthetic applications for artificial life systems. We are also joined by Panayiotis Kokoros (College of Music). Dr. Kokoras is a renowned composer whose diverse interests include an examination of the plasticity of timbre through electronic digital and traditional acoustic means. In addition to the breadth of interdisciplinary knowledge represented by these two new additions to iARTA we also celebrate a growing international reach – Professor Adi comes to us from Argentina and Dr. Kokoras from Greece. 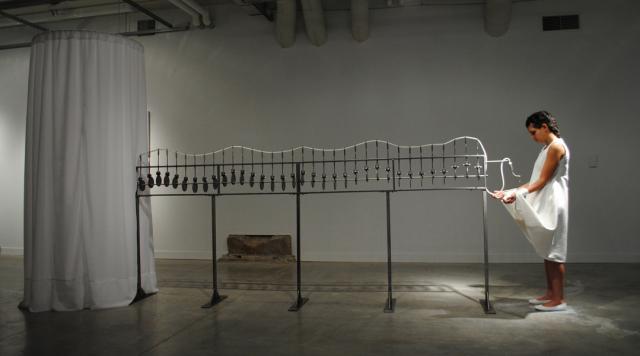 Paula Gaetano Adi (San Juan, Argentina, 1981) is an artist and researcher working in sculptures, performances, interactive installations and robotic agents. Using the human and nonhuman body as a point of departure, her work deals with different cultural studies of technoscience, particularly in regard to how its discursive effects and affects are inscribed in human subjectivity and how they can be reflected through art. Her work has been presented internationally in venues such as the National Art Museum of China (Beijing), MejanLabs (Stockholm), ARCO Fair (Madrid), FILE Festival (Sao Paulo), BIOS4 (Sevilla), National Museum of Poznan (Ponznan), BrandenburgerTor Foundation (Berlin), Museum of Modern Art (Buenos Aires), Espacio Fundación Telefónica (Buenos Aires), among others. She was the recipient of the First Prize VIDA 9.0, the international competition on Art & Artificial life – Fundacion Telefonica, and the First Prize ‘LIMBØ’- Museum of Modern Art of Buenos Aires. She has received different grants and awards including San Juan Bank Foundation, Fondo Nacional de las Artes, Secretaría de Cultura de la Nación Argentina, Blas Pascal University, Ohio State University Presidential Fellowship and the Fergus Memorial Award both in 2009 and 2010. www.paulagaetano.com.ar/ 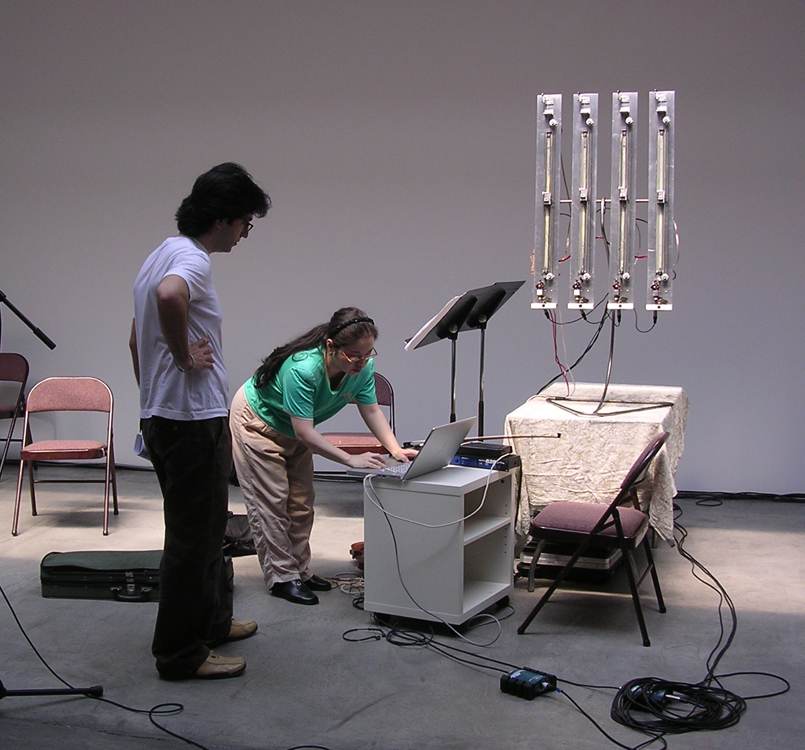 Panayiotis A. Kokoras (Greece, 1974) completed his musical training in composition and in classical guitar, in Athens. Afterwards, he continued in England where he obtained a Master and a PhD in composition at the University of York. He has taught at the Higher Technological and Educational Institute of Crete and the Aristotle University of Thessaloniki. Since August 2012 he is Assistant Professor in Composition at the University of North Texas. He is founding member and vice-president of the Hellenic Electroacoustic Music Composers Association (HELMCA).  His compositional output consists of 50 works ranging from solo, ensemble and orchestral works to mixed media, improvisation and tape. His array of achievements includes commissions from the FROMM (Harvard University), IRCAM (Paris), MATA (New York), IMEB (Bourges), ZKM (Karlsruhe) and 48 distinctions and prizes at international competitions among others Prix Ars Electronica 2011 (Austria), Métamorphoses 2010 & 2000 (Belgium), Giga-Hertz Music Award 2009 (Germany), Bourges 2009, 2008 and 2004 (France), Gianni Bergamo 2007 (Switzerland), Pierre Schaeffer 2005 (Italy), Musica Viva 2005 and 2002 (Portugal), Gaudeamus 2004 and 2003 (Holland), Jurgenson Competition 2003 (Russia), Takemitsu Composition Award 2002 (Japan). www.panayiotiskokoras.com

Composer, Joseph Klein at work with SCCM guitarist Joseph Mirandilla on the premiere of  “Der Demutsahne” 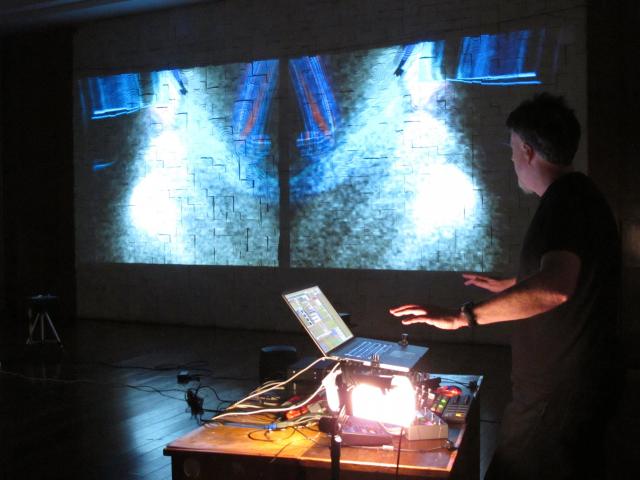 The exchange activities culminated in the presentation of the UNT Composer’s Concert. The featured works included Dr. May’s “Chant/Songe” for clarinet and computer performed by SCCM musician, Zhen Sun and “Ripped Up Maps” for violin and computer performed by May. Works by Dr. Klein included the premiere of “Der Demutsahne” ("The Humility forbear") performed by guitarist Joseph Mirandilla and “Die Tischtuchtolle” ("The Tablecloth Lunatic") performed by violinist Zhao Song. Klein also performed his own Cornell Set, a setting of four poems with computer music, commissioned by the Cornell University Creative Writing Program.  David Stout performed “Drill Wide Open”, an interactive audio-visual work exploring the mythos of the American southwest. 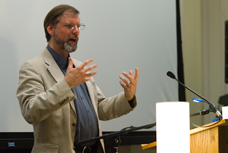 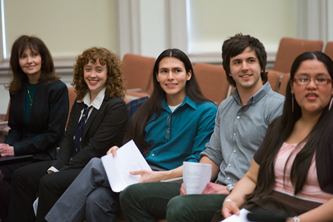 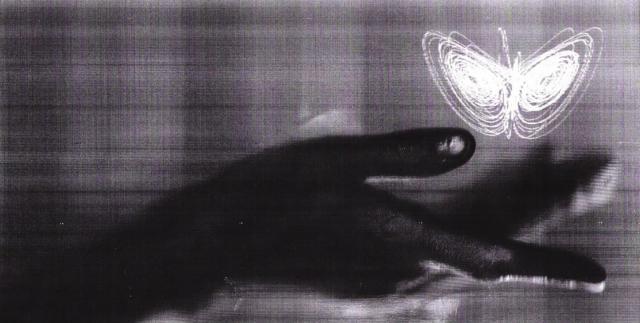 Jenny Vogel, Assistant professor of the New Media Art program has been named one of 30 artists to watch in 2012 by NYART Magazine:

"Jenny Vogel’s work explores subjective themes as they are experienced in the age of information. She examines the anxiety of alienation, the desires of communication and a sense of be-longing in a virtual world. These traits, attributed to Romanticism, are dealt with in her work through the lenses of contemporary communication technology, the media and historical preconceptions. Through the juxtaposition of technology and Romanticism, Vogel attempts to challenge the image of the Internet as the “global village,” objectivism in the news and the ideology of science." 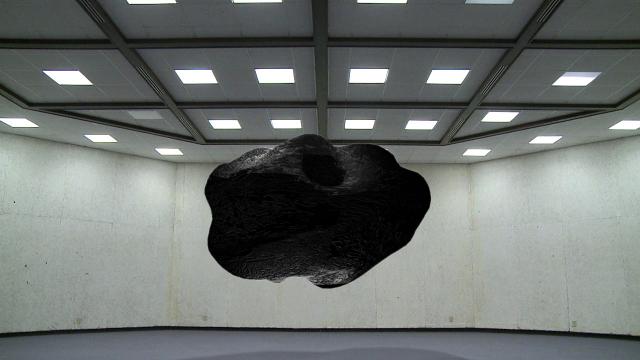 From Utopian Teleologies to Sporadic Historiographies: “Interfaces” of Art and Cybernetics

Jennifer Way and Maia Toteva, PhD (art history), are collaborating as chairs of the session, From Utopian Teleologies to Sporadic Historiographies: “Interfaces” of Art and Cybernetics, for the 39th Annual Association of Art Historians Conference scheduled for the University of Reading (UK) 11-13 April 2013. The call for papers reads:

It has been more than six decades since cybernetics was introduced to the English-speaking world by Norbert Wiener, Claude Shannon, and Warren Weaver.  Stimulated by the information explosion in the 195Os, it grew as an international phenomenon that challenged disciplinary boundaries and preconceptions.  Cybernetic models of “self-reproducing automata” brought about an enhanced understanding of informational and communication systems, engendered artificial intelligence and machine-biological interfaces (cyborgs), and impacted game theory. In the West, cybernetics had a lasting effect on art and popular culture from interactive art, performance, and computer art, to telematic art and American Idol.  The “new science,” however, received a different reception in USSR.  After its initial hostility, the Soviet government endorsed cybernetics as a panacea ensuring the rational control of a failing centralized economy. The interdisciplinary umbrella of Soviet cybernetics protected underground art—from kinetic constructions and installations, to conceptual art and performance. The session redresses a lack of attention to cybernetics globally.  It invites presenters in the visual arts and from non-art disciplines to reconsider or generate new knowledge about generations and geographies of art and cybernetics, including practices that create, distribute, and theorize art forms, concepts, and histories. Papers may explore cybernetic phenomena in artistic environments; examine artistic play on logic and reason; consider how art or non-art agents treat cybernetics as a social and cultural paradigm, or question how cybernetics is presented in historiographies of recent art and what interfaces of cybernetics and art bode for intra- and inter-disciplinary research and practice.

Professor Toteva will be a Visiting Scholar at the College of Visual Arts and Design during spring 2013. She will present a lecture, “The Role of Soviet Cybernetics in the Creation of the Russian Nonconformist Art Movement,” provide an informal survey of Eastern-bloc Art since the 1960s, with emphasis on art and technology, and discuss the development of her research including her education in Bulgaria and the U.S. facilitated by fellowships from the Menil Foundation,  Smithsonian Institution National Portrait Gallery, Getty Research Institute and the Council of European Studies. 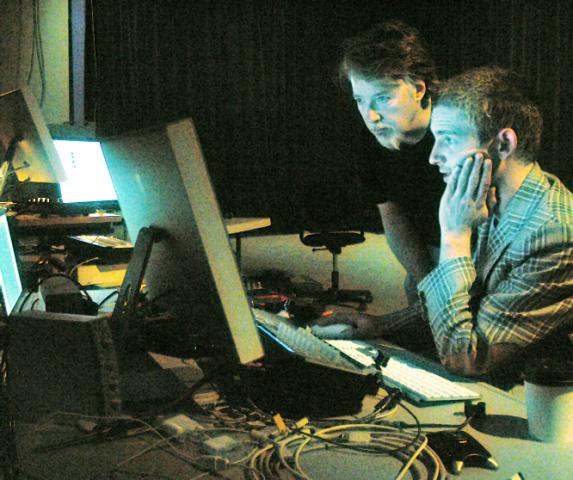 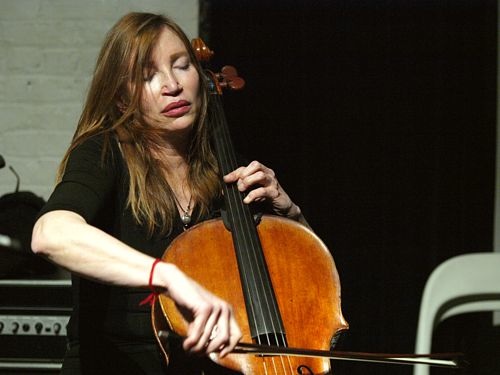 "Women Art Technology: subjects of convergence" at the annual conference of the Association of Art Historians, UK

Jennifer Way (art history) presented her paper “Women Art Technology: subjects of convergence” in the session, “Feminisms of Multitudes” at the annual conference of the Association of Art Historians, UK. It examined Women Art Technology, a project she initiated during 2009 to generate information about contemporary women using technology in the art world. By continuing to conduct oral history interviews inquiring about their definitions, perceptions about, uses of, comparisons regarding and training to use technology in and outside of the art world, Women Art Technology perpetuates an ongoing, open-ended ethnography that digitally records and archives women speaking as subjects who live at the cultural and social convergences of discursively freighted art world and technology forms and practices. The project is grounded in feminist approaches to the history and theory of technology. Its activism includes that it foregoes questions of representation to inquire about use, or practice, as articulated by its subjects, maintains an inclusive approach to identifying interview subjects, creates an archive of interviews for teaching and research, and confounds objectivity by asking interviewers to study their own lived relation to the project autoethnographically.

Her essay on training students to serve as the project’s oral history interviews, “Women Art Technology,” will appear in the 2012 special edited, refereed issue of Trends, The Journal of the Texas Art Education Association focusing on theoretical, social, educational and cultural issues influencing art education. In addition, her paper, “Contemporary Art History in the Age of Critical Theory,” about the ways art history has used critical theory to galvanize its own vanguardism and consequently rendered selected examples canonical, with emphasis on the essay English-language readers know as Walter Benjamin’s “The Work of Art in the Age of Mechanical Reproduction,” was selected for presentation at After the New Art History, the annual conference sponsored by the Journal of Art Historiography at the University of Birmingham (UK).

David Stout premieres Variation 2 of  "Shadow Box Attractions" at CURRENTS 2012 opening June, 22, 2012 in Santa Fe, New Mexico. The work explores the cinematic potentials of a virtual particle chamber. This software environment designed in collaboration with programmers Luke DuBois, Reiner Kramer and Cory Metcalf, facilitates the perturbation and observation of semi-autonomous particle interactions. This live simulation allows the artist to place positive or negatively charged nodes at various locations within the chamber to create complex force fields. These multiple interpenetrating fields interact to yield intricate states of attraction and repulsion. The resulting visual behaviors are rich and varied, from very slow accumulations of atmospheric clouds to swiftly multiplying branches or tree-like structures. In some scenarios the placement, positioning and scaling of the charged nodes give rise to self-perpetuating feedback phenomenon in the form of classic strange attractors. At other times isolated particles perform graceful arcs and swirls or vibrate in stuttering bursts between magnetic poles.